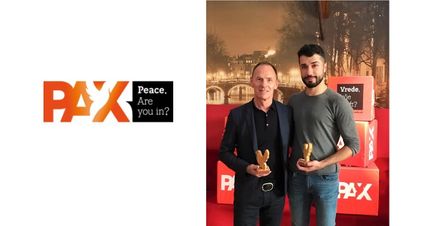 Report by PAXReport by The Dutch National Ballet

For the first time, PAX toured the country in a Volkswagen old-timer to present the PAX Dove to people who devote themselves to mutual understanding and solidarity in their cities and neighbourhoods. During a special ceremony in Amsterdam on 21 September, the International Day of Peace, we awarded the PAX Dove to a number of people who are committed to peace in a special way. Among them were the artistic director of the Dutch National Ballet, Ted Brandsen, who set up a fund to invite the dancer Ahmad Joudeh from Syria to study and dance in the Netherlands, the artists from Lampedusa Cruises and a multicultural group of mothers from a disadvantaged neighbourhood in The Hague. In total, 23 PAX Doves were awarded.

To to the top of this page